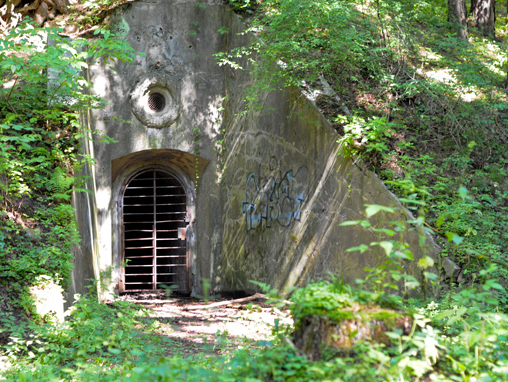 Polish army Vilnius garrison Antakalnis ammunition bunker complex, more commonly known Antakalnis or Silo Bunkers name, is installed after Sapieginės Hill, Silo Direct access to the street. The bunker complex is located 1924 – 1926 metals: Poland occupied Vilnius region after two years of the Polish army order was placed in the mountain slopes of the cast in an underground space, forts for crews, headquarters, Ordnance, ammunition and weapons storage. However, they have never been released in any one shot. During the war and later bunkers were used as shelters and warehouses.

2008 in Antakalnis bunkers added to the Cultural Heritage Department of the register of cultural landscape as a rare architectural and engineering object. Antakalnis bunkers are also identified as important habitat protection area in order to preserve one of the largest in the Habitats Directive Annex II and the Lithuanian Red Data Book of European far-reaching (Barba Stella barbaric Tellus) wintering areas in southeastern Lithuania (SAAD data 2013 01 05 one of the 5 hoppers overwinter 59 of European widely). Supposedly, that in addition to European widest found in six other bat species. In order to protect hibernating bats from disturbance of bunkers forbidden to visit the bats in hibernation (September to April.), their inputs are blocking.

Garrison Antakalnis ammunition bunker complex of buildings associated with the occupation of the Vilnius region. Soviet Russia and the Polish War (1919-1920 m.) permanently left the tension between the two countries. Poles went to the large reclaimed areas of the Bolshevik – 1920 10 09 Vilnius and the Vilnius region seized by the Polish army compound, led by Gen.. Liucjano Zeligowski. Polish government in the occupied land was allegedly self valstybėlę – Secondary Lithuania, who 1922 was connected to Poland. 1923 m. Ambassadors conference in Vilnius region recognized Poland. Believing neighbors, especially 1922 Founded in the USSR, Vilnius Poland decided to make a modern fortress against possible enemy in the North-East. So 1924 m. summer, Polish army order of the ammunition bunkers began construction Antakalnis, Rasose and Snipiskes, ready 1926-1927 m. 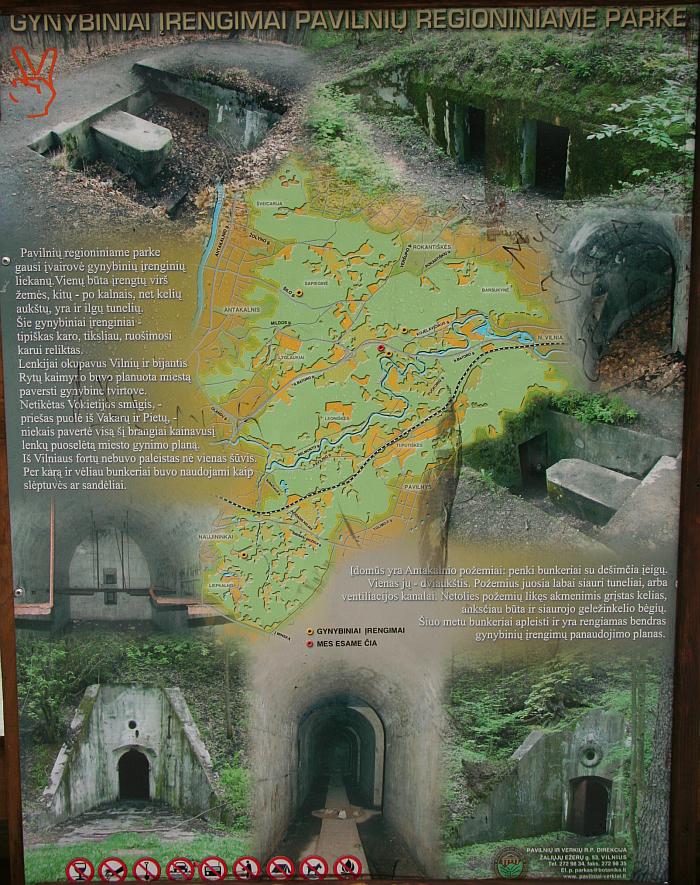 The main fortifications with fire plugs were positioned for the slopes of the hills surrounding the town on the left bank of the Neris, auxiliary – right. Started complex, expensive, before the Second World War protracted work, who, it seems, left unfinished. Polish historians doubt, or a total of 1939 m. At least one Fort Vilnius defense system was caught fully equipped and armed.

Antakalnis bunkers built 1924 – 1926 metals. Bunker Complex consists of five bunkers with dozens of Access. Of these, the four-storey corner is, the middle - double decker. Bunkers of rectangular chambers and passageways constructed of concrete structures. Two-storey bunker to the second floor is accessed first floor corridor on the side of the stairs. The first and second floors connected by a shaft, which was for projectiles, which weighed about 100 kg. Bunkers surrounded by a very narrow tunnels, who accidentally Detonation of explosives were stored mitigate the blast wave. Near the left field cobbled path, previously there were some narrow gauge railway track. Ruins of the East, Central and West Bodyguards residues. The entire territory of the complex is limited 32 reinforced concrete columns - boundary markers.

Like Antakalnis, Ponar, Saltoniškėse, Belmonte was built on the mountain slopes of the embedded 1-2 storey underground facilities, which was designed forts for crews, headquarters, Ordnance, ammunition and weapons storage, Contact, power plants, transport, hospitals. It was equipped with ventilation, water supply, drainage. Belmonte, Rokantiškės forest to outpatient over several floors underground have some complex, thick layer of concrete bunkers covered with heavy artillery and machine-gun nests. All this special communication and transportation lines have been merged into a single system. Bend, Liepkalnis, Pavilnys before the war was also the start of work.

Judging from the residue that had to be covered with concrete machine-gun nests, anchor trenches, tank trenches. It was launched in brick and several tunnels, resembling those already built. Under the guidance of military engineers, fortifications built by non-military organizations, work was done by Polish soldiers and freelance workers, promised to keep “State secret”. According to some of the old Vilnius story, these works Lithuanians were undesirable as unreliable, and taken to the Polish army sent to the Office of Poland in the depths. Due to the construction at that time had come several scandals, as contractors to the organization passed an order to each other, was led by double bookkeeping, on what the wall construction cost 902 741 Złota

Stake complex city defense system was connected to a narrow rail quickly equipped with two bridges over the Neris River Bend at ANTAKALNIO and deep forest. Its purpose was to provide the materials of construction of fortifications, and during the war – fire ammunition supply points, Army major regrouping enemy attack directions. Judging from the track residues, some of the underground facilities could have been pushed to the railway wagons (Antakalnis, Ponar and others.). Even a few decades ago in some rooms were more spacious tunnels can be discerned here once installed used luxury finishes residues, the existence of a good plumbing, telephone cable jacks. Here there was probably room, for headquarters. 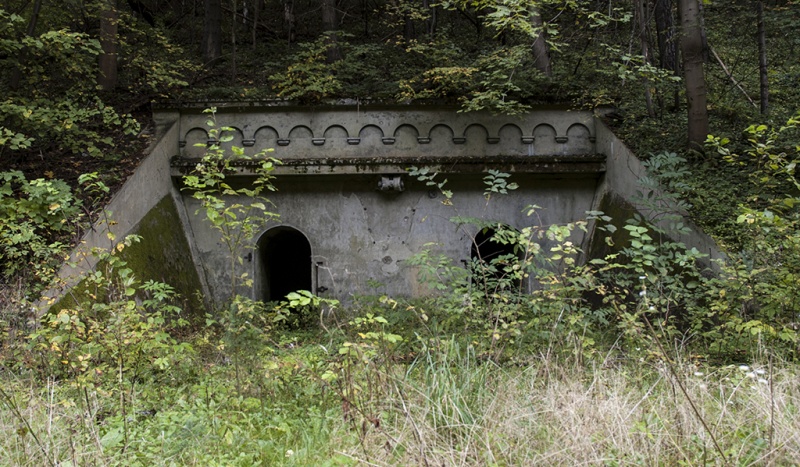 It remains unclear, of those fortifications was finally completed on the eve of the Second World War, and which – under construction, what was there (or planned) forts weapons, Indicative number of crews and t.t. Polish military leaders of the construction and armament of data, must be considered, destroyed, because they had enough time to. Of course, only one: a sharp blow to Hitler's Germany stultified all of this have cost dearly cherished Polish city defense plan. The reason is simple – the enemy attacked not from the East and North, from where it was planned to help fend off an attack bunkers, while the "rear" – West and South.

When the Red Army 1939 m. September 19 d. (Polish sources – September 17 d.) occupied Vilnius, war Poland was virtually lost the. North-east from Vilnius forts have not been released in any one shot. Part of Vilnius fortifications stores had used Red Army 1939 m. and Lithuanians 1939-1940 m. The same did the Germans, occupy city 1941 m. At the end of the war, 1944 m., They hurriedly began preparing for the defense of Vilnius. By building a new concrete bunkers, preparing anti-tank ditches in many cases focused on the former Nazi Polish forts layout, Some tunnels using ammunition storage. Attacking these defenses 1944 m. July, many men have lost the Polish underground Home Army. Meanwhile, the city will soon šturmavusi Red Army not to one of the German fortifications longer neapsistojo. Army led by General IDČerniachovskio Soviet tanks invaded Vilnius through Liepkalns and Rasas, atsidurdami German defense behind.

After the war, part of the dungeon was occupied by the Soviet army, other – installation of vegetables and other stores. However, the majority of the underground parts of the premises, between – perhaps the most interesting Rokantiškės woods in several storey above-ground bunkers and reinforced concrete domes equipped embrasures – was abandoned.

The show "Present and Future" - about Antakalnis bunkers and their implications for bat conservation: