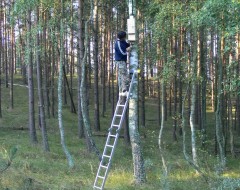 Habitats, where the lack of natural shelter, old trees with hollow, trees with thick loose bark, for special nesting boxes for bats. This is one of the most effective measures to bat care, which creates the possibility of nesting boxes for bats to settle in those places, where the natural conditions are not, or ten, where their little – increase the number of shelters and also reduces competition between bat. It was found, that different species of bats prefer a certain type of nesting boxes. My Favorites is a standard, multilocular and flat type of nesting boxes. However, many types of nesting boxes are not tested, and this is definitely worth it - maybe they'll be even more effective, and they settle in rarer species. We are also interested in such an experience. 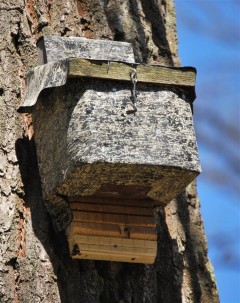 Planed to be used to construct nesting boxes 2,5 cm historiography lentos. Thinner inappropriate, such as nesting boxes could be exposed to the appropriate temperature regime, will be smaller leaks, etc., boards and bumping required to įropoti bats nesting boxes inside. The inner part of the rear wall of what is necessary to make a few centimeters of 1 mm deep cuts - bat will be easier to cling to the wall. It is desirable, the roof is bent forward. 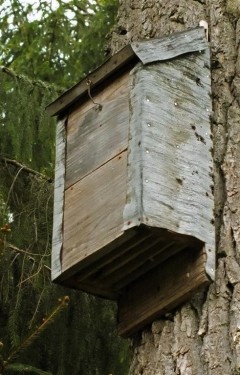 In order to reach the inside of bats, nesting boxes at the bottom to leave a small, two 20 mm, wide gap. The optimal variant of 15 mm 20 mm. Through the lower slot on the larger species of bats will not be able to get inside, and nesting boxes with too high a canal just avoid.
Bat nesting boxes outside recommended upholster ruberoid, parchment (parchment) or further. It Inkilas more protected from the elements and extends the life of.

Nesting boxes for bats can be lifted glades, forest edges, parks or water bodies located in the trees - in open areas, where bats convenient priskristi to trees. Perhaps the most successful of the bat nesting boxes are lured forests. In addition to smaller bodies of water for nesting boxes have to be right next to the water, a few meters away. The larger bodies of water is recommended for hanging bird houses far away from water, because such places are often strong winds blowing. Ten, where there are no trees, nesting boxes to be moved on the walls or on the specially dug pole. Under no circumstances may cause nesting boxes on concrete or metal electricity pylons – new, even inexperienced bats success when landing the nesting boxes trying to escape užsikabindami behind the tree trunk, and on the metal or concrete surfaces do not. The choice of location of the tree is important, to take into account, priskridimas that the vents are not covered by the branches of trees or shrubs, and the same nesting boxes should be illuminated at the sun 4-5 hours a day. Shade of nesting boxes to raise badly heated and absorb moisture, and bats avoid these shelters. 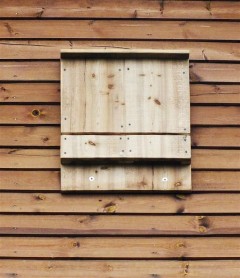 Flat bats nesting-box on the wall of a building

It is interesting, that bats seasonal use more than one hiding place. Hiding ever-changing, so in one area should be at least some suitable shelter. Be to, if one place will bring a few nesting boxes, t.y. the whole team put in place by, they will be charged soon. The group may consist of several trees, on each one, of, three nesting boxes. Depending on the life cycle, and air temperature, nesting-boxes for bats require different modes of heat. Thus, nesting boxes to be warmed by the sun differently, part of the nesting boxes should be oriented to the south, part of the west, and part of the east. The northern half of the targeted nesting boxes is not advisable to raise the. If the nesting boxes are not very many, best to raise one, two nesting boxes on a single tree, oriented to the southeast and southwest. The group selected a few trees (depending on the amount of nesting boxes), the distance between the trees must be between 20 meters. Houses mammals hanging recommended not less than 3-4 meters, if there is a possibility, and above. Observed, The above raised bat nesting boxes occupy more. It is important to, the nesting-box hung steadily respect, even prevent the load swaying in high winds. Therefore, the best nesting boxes nailed. This method of attachment of the tree does less damage than when used to tie a rope around the trunk or wire. 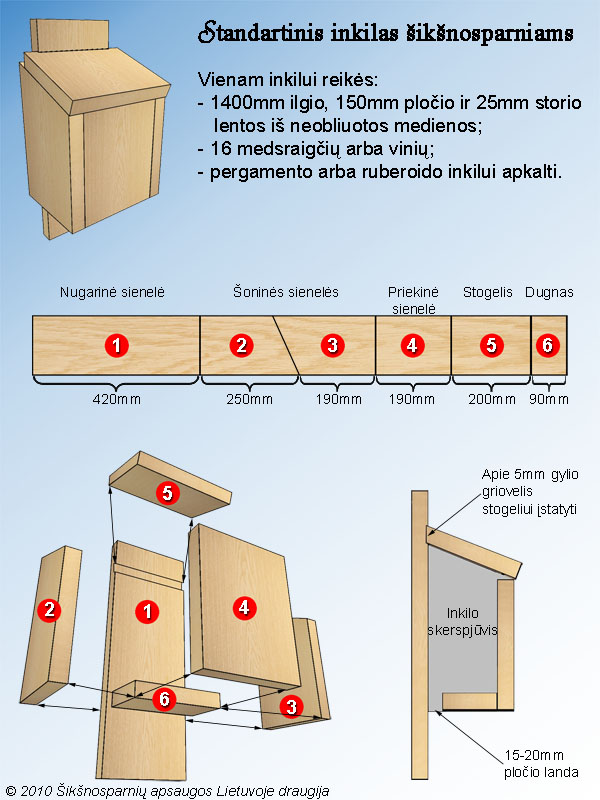 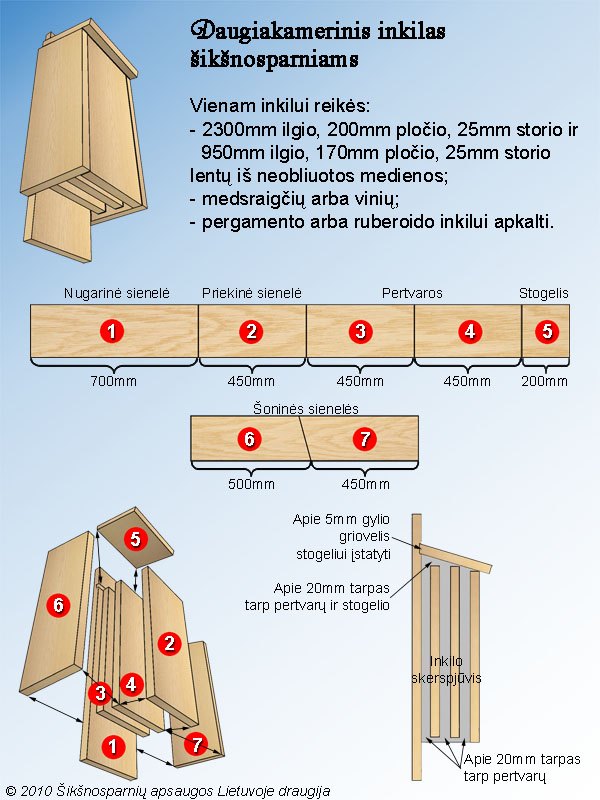