Most bats mate in autumn, migration, or winter, already assembled in the wintering. After copulation viable sperm in the uterus to spend the spring and egg fertilized only in the spring. Our climate zone juvenile bats lead 1 once a year. Juveniles led the colonies, made up only of females. Childbirth females cleared away from prison, occupies a horizontal or vertical (Head to the top) position and tail skraidomąja slicks catch newborn.

Most bat species females birth to one chick, and pipistrelle, evening primrose and chickpeas Plikšnys females usually give birth to twins. Young are born bare. Chick-born mother immediately clears, and this immediately sticks to the mother's fur and starts to suck milk. The first days of baby-strong clinging to mother, so it, necessary, fly with the young on.

A few days after the birth the female does not operate to hunt - chick nourish itself lives on in the body of accumulated reserves. Juveniles are fed only breast milk. Bat - the only mammal, a chick milk feeds until, until it becomes the same size as an adult bat. When a female wants to stop breast-feeding and have to fly to hunt, special motion, Sweep the entire body, give offspring to understand. After returning from a hunting your mom chick readily recognize from the noise, that each offspring is different. Joey returning mother rushing to greet her snout laižydamas. 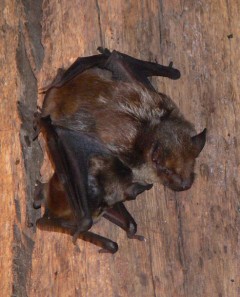 For the first time, juveniles do not fly away - only inspect around the existing shelters, and quickly returns to. There is, inexperienced lost in the mammal back to the hideout and return only when the mother came back from the hunt. If the flight is a complex of shelters, offspring are often hard to get into it, and being unable to get back to it can result in death. So, where a colony of bats living in your attic and you want to get rid, do not rush to plug holes departure. Some types of chicks during the first flight is often observed and accompanied by his mother, other types of chicks begin to fly and hunt for self-. First day of hunting of juveniles usually not successful, Only a few game nights they įgunda to catch insects. It is therefore very important to, learning to hunt is a lot of food.