If bats live in a house 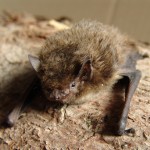 In this world of bats appeared before 50 million. years, man (Homo sapiens) - Less than 3 million. Bats and people began to live together since those times, when man lived in caves, but when a man stood up on his feet, started to use tools and fire, bats had to withdraw from their hiding places. But human neighborhood bats completely abandoned and trying Learn to Live with. Often bat colony (which sometimes range from tens to hundreds of individuals) occupied by people in the neighborhood, in particular likes to lofts, attics and roof structures in the cracks. Such places attract these nocturnal producing animals due to the favorable conditions for them to settle down - darkness, proper temperature and low interference. Natural places to settle in colonies (for example., large receiver) the degree of, because bats often stays close to human, where the summer leads and produce offspring. Known high output pups colonies, are formed and lives for decades in the old manor, churches, old rural homesteads. But lately accelerated in old houses, Churches, Manors Renovation. Often the work is being done regardless of bats living in them, and renovated buildings often become unusable for bats to live. So before planning or carrying out the renovation of buildings is advisable to contact with bat conservation in Lithuania Society, experts to verify that the latter, bats living in a building, assess the need to protect and to propose solutions.

If you agree, that bats live together
If you lived in a small attic bat colony or single individuals, one of them usually do not suspect. However, the higher the bearing colony may cause some inconvenience: riot, cypsėdami and krebždėdami, fly to the house. If the colony is very large and bats live in the same place for many years, formed a number of fecal. This problem can be easily solved after the bats hanging in places, t. and. ten, where clearly visible fecal pile, placing any pallet or container. It is your attic floor is not damaged, smell not to acquire, and nitrogen-rich guano (bat droppings) also ideal garden fertilizer. 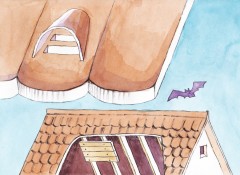 House, which settles bats, tampa originalus, an opportunity to evening with the whole family or friends monitor these nocturnal animals. In many countries,, as: Czech Republic, UK, Such houses are very valuable. Most of our land animals is very difficult to see, the more they watch, and the bats really great object of observation. Especially interesting in the evening to wait for their departing from their hiding places, watch, the change in the number of, when they start to fly chicks, As every year, this number changes, etc..
If you want to, your home to settle bats, homeowner can "improve", do it easy. Bats attic definitely not going home, if it is tight and it is impossible to get. You would need to install a small departure cavities, for example., House panel installed in a small attic opening. How much more interesting way - the use of special tiles to bat Landers. Usually bats settle in home spaces, ertmėse. They can be fixed without attic wooden panels or individual boards. 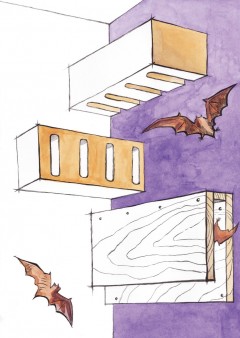 Only important, that the gap between the boards and the roof structure (or between two boards) would be about 2 cm. If the gap is large, Bats will feel insecure and are unlikely to, or use this container. Be to, attics and on the outer wall of the house can also be hung usual nesting boxes for bats. Can be installed in shelters and on the exterior walls of the building. This is a very simple - it's enough to the wall of the house on the intermediate attached wooden board or panel. It is important to, that the gap between the boards and the wall is 2 cm, and the same construction is sealed, the ingress of water through the top. This hideout can be a wonderful home decoration, because the front wall from the outside can be painted or interesting Carve.
The species is also possible to adapt the winter bats. On the basement walls can be attached boards and leaving 2 centimeters primūryti brick or the use of building blocks with holes. In this way, a wide variety of cavity, where bats can hibernate quietly. Realistically, that the species can not be too tight, It should be a small vent cavity, that bats can fly out even in the winter.

If you do not agree, bats that live in hotyour
Bats are an integral part of our country's biological diversity, which protect and defend the laws of the Republic of Lithuania. If the landlord bat neighborhood inappropriate, they have to choose the right, humanišką, method to remove the flying mammals, however, it should be remembered, that 15 Lithuania registered the bat species in the Red Data Book of Lithuania is included 11 types. So drastic attempt to get rid of "Inam" may result in legal troubles and fines. So, if you really made a decision, that bats are undesirable neighbors and want them to get rid, contact with bats Protection Society of Lithuania and we'll both building owners, bats and advantageous way.
There you have heard about their own tests to get rid of bats, most of which ended in failure. It is important to remember, that no attempt should be made prior to the use of poison. Chemical affect bats will be lost in the environment, suffering from, die. Second, ANNEX poison bats can cause a lot of trouble, when faced with people or other animals. Such contact may affect children or pets. Be to, Chemistry - it's just a temporary measure, because usually bats after a while returning. So, This method is simply inhumane, since the destruction of pregnant females or helpless chicks.
One of the safer ways of removing a bat colony is a direct hole, through which these animals fall into the building, Patching bats departed – no way to do that then, when bats are inside the building. However, this hole can be more than one, therefore should be carefully monitored during which bats fly away and come back. And as a compensatory measure to the house it is advisable to put up a special nesting boxes for bats, especially multilocular, which these animals will continue to breed and keep at rest home owners peace.
There are other variants. Bats do not like light and noise, so in the spring during the day often visit the attic, triukšmaukite, You can play music, leave the lights on - this loft would be unattractive to bats, and they want it to stay. Remember! All these steps must be done by spring.
If you did not notice, and the bat, however, settled in your attic, should suffer, and enable them to live those years in your home, as of June until the end of July to interfere with and harm these animals in any way be. Females in the lead and raise cubs, this is a very vulnerable period of the mammalian life cycle. Need to let them stay there. In a rapidly, August, pups will grow up and leave the colony of bats leaving the lofts. Bat female per year brings only one, in rare cases, two, cubs, it is therefore important to protect the breeding colony from destruction and thus contribute to these beneficial mammals survival.