Animal exceptional skills have long been interested in academics, which clarifies how biological systems used in technical problem solving principles are, or may be used in the technical field. It seeks innovative solutions and inventions. Bionics is based on many of the aerospace and aviation achievements. Biologists working together, Engineers, constructors, Designers, technicians carry out interdisciplinary research, analyzing naturally occurring phenomena and working mechanisms. However, these studies do not always serve peaceful purposes. Have you heard about the bomb Šikšnospanių " (English. Bat bomb)?

"Bat Bomb – This is the lowest explosive military aviation history, that the target had to carry the bat. The idea is to connect the bat explosive diatribe came from Pennsylvania dentist L. S. Adamsui (Lytle S. Adams). It, Like many Americans, was shocked by the tragedy, when 1941 m. December 7 d. Japan's navy and air force attacked while nekariavusių U.S. naval base in Hawaii, Pearl Harbor attack, and in a few hours destroyed part of the U.S. Pacific Fleet. The attack was so unexpected, equivalent response that could be just as unexpected and not something less painful U.S. response to Japan. U.S. government began streaming a multitude of offers, among which the most at first glance it seemed strange, to say the least. Among them was L. S. Adams Idea. His hobby was spelunking in caves and bats living behavioral observations, so he offered to carry explosives used bats. And this proposal nepasiklydo among other, it was personally delivered to the country's first lady Eleanor Roosevelt (Eleanor Roosevelt) its regular dental prophylaxis during. It. Roosevelt liked the idea and the first lady brokered the delivery of ideas in person to President. 1942 In January, U.S. President Franklin D. Roosevelt (Franklin Delano Roosevelt) zoologists and asked the military to find out the practicality of the project. True, his letter he emphasized, that although the idea of ​​a very unusual, its author is not crazy. The same idea was based on the biological characteristics of the bat. Insectivorous bats are nocturnal animals, so suddenly find themselves in the spotlight, rushing to hide in dark corners, at least as far as their native-like domes – home attic, cracks in walls, Cellar. Therefore they are attaching explosives and projecting over the enemy territory, they will rush to slim structures. Knowing, Japan at that time most of the buildings were made of bamboo and paper, bursting at the bat-mounted cartridge padegamajam, once you have a fire. And that game with explosives attached blaškytųsi less and less would hazard during transportation, was planned to be another feature of the bat – if the ambient temperature is close to 0 degrees Fahrenheit, bat goes into hibernation mode, t.y. drops and their body temperature, metabolism slows down and becomes immobile, these animals. And if the ambient temperature rises again, awake and bats. 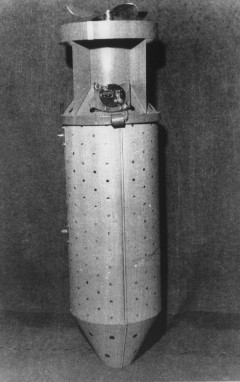 So the bats had to be "put to sleep", then they fastened delayed explosive, placed in special, themselves to their opening containers, Emissions of bombers over enemy territory. Slowly allowing containers bats heat up, atsibunda, containers near the earth opens and they departed from attacking bats hide in buildings. And then the explosion… It has been calculated, that ten B-24 bomber, each of which is loaded with a hundred containers with bats, ascended to Alaska 1 million 40 thousands of bats with incendiary bombs released over the industrial cities of Osaka in the Gulf. It remains to imagine the extent to which the fire would…

The. S. Adams is assigned to a project team of biologists immediately took places, where you can find a large amount of bat, Search. He worked very hard and soon išlandžiota already about a thousand caves, and about three thousand of abandoned mines and even used. Originally carry bombs researchers were chosen from the highest detected – Perot Eumops species of bats, which unfolded wingspan 50 centimeters and could carry even a pound weight of the bomb. However, it appears, that they are not sufficiently numerous and are protected. Studies richest Antrozous pallidus species of bats could carry 85 grams of explosives, however, the researchers decided to, that most bats are tough enough for the action. It was therefore choose Tadarida pumila species of bats, who, although he and weighs only 6 – 12 grams, but they were able to carry three times the weight of them more "goods" – 28 grams. The largest species of bats Tadarida pumila colony was found in a cave Neither (Ney Cave), located in Texas. The colony was so great, the animals in the cave streamed fly 5 hours and was counted on 30 million. animals. The. S. Adams' team caught several of these bats, placed in the freezer cars and drove to Washington, that demonstrate, how they can carry bombs.

1943 March began an experiment called "firebug dispersion method check" (Test of Method to Scatter Incendiaries), Its main goal is to Set bats use small incendiary bombs on the enemy transport objects options ". 180 bat bomb was attached decoy and animals in a special cardboard container thrown out 300 meters in height. The container was opened, bats flew out and rushed to hide Favourites. The experiment succeeded.

The next stage in the New Mexico Carlsbad cave was caught on the 3,5 thousands of bats. 1943 May 21 the day he put the bats 5 special containers and threw out 1,5 km altitude. However, this test has not held in store – most of the animals wake up from hibernation unrealized state, atsidariusių leave the container and got killed. There were other problems – cardboard containers did not work well, as planned, Surgical compressors robbed bat breast skin, etc..

It became clear, Containers that bats have to fall more slowly and require a new parachute. It was created and a new container structure – they were better ventilated and separate sections for forty įmigusį bat bomb. The next test was used on the 6 thousands of bats. The pilot version of the bomb was in a plastic shell evaporated kerosene, which was attached to the bat chest surgery compressor and thin seams. It was planned, Bats will be able to excavate the thread and leave the bombs. His Profesorius Fiseris (The. F. Express) developed two pilot incendiary bombs options: 17 grams, which burned 4 minutes 25 cm high flame, go 22 grams, which burned 6 minutes 30 cm high flame. A miniature fuse was spring-type, held in place by a steel wire. Bombs ready for use, t.y. delayed release mechanism, in a special hole near a steel wire had to pour copper dichloride. Copper dichloride in about half an hour disrupted wire, loose fuse suddenly shifted to the back and hitting hard to ignite the fuse, the capsule kerosene. 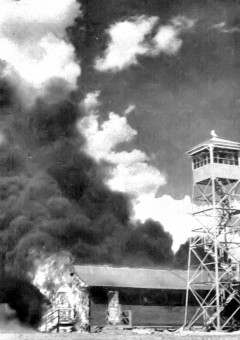 The first attempts ended 1943 May 29 day with the master of war (Carr) conclusion: "The experiment used a bat weighing an average of 9 grams. Without any problems they may have to bear 11 gram loads, 18 grams – satisfactory, but 22 grams could not lift. "It would seem, is positive, but 1943 June 8 day in a secret report presented a brief war captain, that the tests were completed after, when a fire destroyed most of the test substances… Captain "forgot" to mention, that basically tests were successful – specially built remote wilderness Japanese-style village with the help of the bat was successfully destroyed. And even after the conclusion drawn by, the experiment is successful and the unit of "effective". The next day, the Air Force leadership decided to check and together to introduce a new weapon Air Force Base in Karlsbad, but returned to the base for the negligence of staff left the cage door closed bat and some future kamikaze bomb attached to escaped and hid in attics hangar. As a result, the fire broke out and destroyed hangars. Along with one of them stood General car ... What was the reaction of General History silent, but, judging by the conclusion of the master, it is easy to predict. Neužilgo dust incident, 1943 August, the project was transferred to the Navy, that somehow it called "X-rays" (Project X-Ray).

1943 October, the Marines have taken to protect the four caves with bats, that, if necessary, is able to catch the bats – in one night it was possible to catch a million of these animals. The first "sea" tests with bats-bombers began 1943 December. These tests were carried out almost 30 successful targets of arson and, writes historian Robert Serôdio (Robert Sherrod), "Four of them required the intervention of a professional firefighter". Some experts believe, at that time, was replaced by bats mounted bombs combustible material – of fuel to the already Harvard University researchers developed napalm. Napalmas (English. napalm) produced by the fuel (gasoline, žibalą) plus 4-11 % soap - organic acid (naphthenic, palmitino, laurino), aluminum salts. Napalmo, containing magnesium and inorganic oxidants, flame temperature of 1600-2000 ° C, and if there is and alkaline (the so-called "supernapalmas"), then it flashed even in the snow or in the water.

Biggest tests were made for 1944 August, however, the Navy, Admiral Ernest King (Ernest J. King) understood, the bat-bombers probably might not be ready for war until 1945 Mid-year, it, despite successful tests, stopped all work on the project. The official reason for – released into the wild unpredictable behavior of bats.

Ideas author L. S. Adams worked on the project until its closure, and very sad, when the idea was not realized. He argued, that fires, which would have resulted in a bat-bombers, would have been more effective destructive than nuclear bombs, which swept the ground of Hiroshima and Nagasaki.

Traveled to the archived bat bomber project that does not have a thick layer of dust. The use of animals for military purposes tests from time to time to analyze and present arms makers, policymakers and military operations. Pentagon experts carefully studied the project plan in Afghanistan in the underground fortress "Tora Bora" hiding Osama bin Laden's murder. Military strategists planned, that led innate instinct bats fitted with explosives to penetrate the underground and blew No terrorist. 1. However, this plan was not going to come true for the very simple reason – such an operation was necessary, in particular those living in the basement of the bats, as from other places come not penetrated deep.