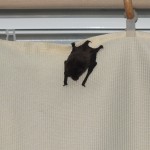 Pipistrelle resting on the curtain

From the end of July and all of August manned space often flies bats. Most often, it has Grown chicks, currently active flying, learn to catch flying insects, choose safe shelters, and other subtleties of survival. Leave, lack of experience and a change in their leg - on the day of scorching heat and warm nights, a lot of people are sleeping, or at least open the windows to open, through which the bats and into the interior of. And here as lucky - some quickly find where to fly through, other frightened begins to wander around the room, etc.. And if the room is people often face confusion - animals around the room accompanied by vacillations horrified people shouting, screams, Flying Towels, slippers… Then gross negligence navigators, if they manage to more or less avoid other flying objects at them, but does not find the road to freedom, It remains to try to squeeze in somewhere - for cabinets, chests of drawers, Picture, climb between the clothing and the like., and wait for the next evening. Bat we do not change our behavior, but we can change ourselves. If the night bat flew into the room, do not attack him chase out. Naturally, that are most difficult to overcome your fear, but on their neighbors and try to be calm nešūkauti, did not swing with your hands or a broom, not try to adjust the direction of flight of the bat slippers help - you just need to open the window, Open curtains, silently wish you a happy path and go into another room to drink tea. True, if the room is a pet (dog or cat), protecting the psyche need to take with you – After all, not every cat will be able to come to terms with the fact, the mouse began to fly… And while sipping tea, admire the stars bat, by the time the room paskraidęs, find the departure. If you fail to find a bat to fly, And I want to own at least as far as the dawn of sleep, then need to bat out cajole themselves. 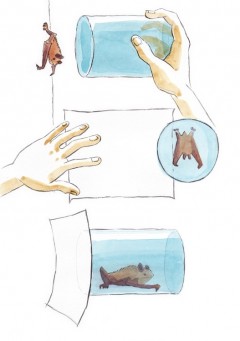 After rotating the wheels at pet tired and regularly lands on the wall to rest. Caution should be used when access cover and bat box or plastic cups (for example., from shoes). Covering the walls and boxes to be cautiously push through harder but the area is a piece of paper and bottle / box, and found itself covered with a bat to be placed in the field. Here the container / box to be put on the ground at, o bent 1 m height (on the windowsill, roof of the car and so on.) ir atidengti. The animals išropos and float. If frightened, hid the bat hard to reach places, then leave it alone until the next evening, and only then repeat the procedure already described: atidrykite window, Pull the curtain and wait, before he will depart. And if you tired to rest on the wall, Catch then the jar / box help. But it is important never to forget, the bat or any other wild animals can not take his bare hands.

If your home is often užklysta bat, recommend windows screened. This can be a mosquito net - it will play a dual function : protection from vampire bats and Society.