The living room gets bat people usually raises the question, as soon as possible to cajole out. I have to hear the question and what it could mean.

How to handle bat in the room gets warm season you can read at: http://www.siksnosparniai.lt/jeigu-siksnosparniai/iskrido-i-kambari/ If you flew in the cold season, before taking any action, consult with the bat researchers phones 8-684-63709 (Remigijus, Vilnius) or 8-620-30707 (Deividas, Mažeikiai). And the very fact of our bats entering the country has more chance, or something decisive mark. While in China bats are considered a symbol of success.

In Chinese culture, a highly developed system of symbols. Symbols used in various amulets, expectations expressed in the holidays, described their position in society, expressed the mood. Be to, symbols or combinations not only convey meaning, but also be aesthetically appealing.

Chinese language words bat and drew the same sounds and recorded in the same hieroglyphs - "FU". That is why the bat is a good image of China and a symbol of success. Symbols of these animals often paints in red - the color, which symbolizes joy. It also has implications characters depicted bats in the number and position of the picture. 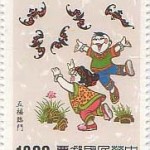 China widespread image, depicts the flying bats watching kids - so taken over their happiness waiting. 1992 in China was released postage stamps with the plot. And this is not the first postage stamp with bats – such stamp printing tradition in China has been around since the nineteenth century, even. And with the first of this type of stamps is associated philatelic rarity even the appearance of. 1894 was prepared in five living symbol of happiness Stamp Series, Empress for 60 anniversary. However, when printing error has occurred and the first in the series leaves were printed with only four of the five living bats symbolizing happiness. With this error was printed only 96 postage stamps, one of them quite recently was sold for 68 thousands of dollars.

Five living symbol of happiness, is written in hieroglyphics "WU-FU" - is widespread prosperity around the mark set five bat clip. Five bats - is success, happiness, Sanitizing, joy and longevity. For a long time it was the image of a bat international security organization (Bat Conservation International) emblem.

Chinese symbols have two bats means double happiness or the happiness and success. Often bats are portrayed next to a peach or peach fruit tree, which is a symbol of fertility and immortality. Amulet metal bats usually depicted around the hole in the middle of the amulet. 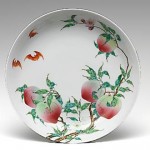 Chinese symbolism, researchers say, the bat symbolism for many thousands of years, but it is popular today. Five gracious advantages souvenirs decorated with images, T-shirt, cards, coins, and sometimes even lottery tickets.

With the success of bats are associated in some other countries. Scotland in ancient times the belief states, that if before quietly flown bat begins to dissipate rapidly rising up and attacking the Earth, it means, that struck witch Hour, where they can manage all the special protection of people without. Maybe so if you house a colony of bats in residence, their market value rises. Ancient Russia superstitious people dead bats used to carry a shriveled bosom hoping to secure health and happiness. Suspense, how they used these charms, South Australia but living in tribal people believe, the bat life is connected with human life, and if you kill a bat, it is a shortening of human life.

So if a bat flew into the house, this can be considered for future success in the.