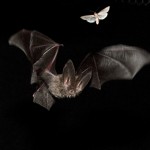 1972 m. 139-ame „American Association for the Advancement of Science“ susitikime Edvardas Lorenzas ( Edward Norton Lorenz) read the message „Does the flap of a butterfly’s wings in Brazil set off a tornado in Texas?“ (left. Can the flap of a butterfly wing in Brazil cause a tornado in Texas?). The title of the report describes the remarkable phrase is now better known butterfly effect of chaos theory idea, the butterfly's wings can create small changes in the atmosphere, that can change the way a tornado or delay, accelerate or even prevent its occurrence in a particular area. Waving wings depict small changes in the initial conditions of the system, which causes a chain of events, leading to large-scale changes. Following the example of the bat effect can be considered a statement, that if the U.S. state of New Jersey, Somerset County for wind power perish bat, Učitoje (The U.S. state of Texas) in the agricultural products market could rise in tomato prices. What could be the connection between the bat and the price of tomatoes? 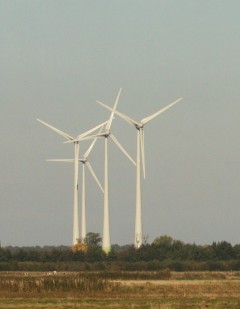 Of wind power comes the risk of birds have long been, but little-known, bats that they pose a much greater threat than birds. As the news, the majority of bat orientation environment uses echolocation method, and it helps to detect and catch even a mosquito-sized insects. Therefore, they should avoid and the rotating wind turbine wings. And they usually do it, but there is another problem. For several years, studies have been carried out by the, that only about half of the wind turbines found dead bat-wing turbines have signs of injuries. Oh and they could appear after, when the bats were already dead. These studies revealed through, the largest wind farm in the threat to bats, that of the rotating wind turbine wing ends formed a low-pressure field. Bat fly into the field of air pressure in his lungs is higher than the ambient pressure and the difference is often a lack of tiny blood vessels in the lungs – we can say, that this animal lungs explode. Such sudden changes in ambient pressure, otherwise - barotrauma, caused by internal bleeding symptoms had 90 percent. the wind find a dead bat. Birds do not have such a problem, because their lungs are adapted to similar effects and, therefore, are different from those of mammals.

U.S. scientists estimate, for 420 Pennsylvania State area from wind turbines a year, killing more than 10 000 bat. Most of them died last summer months, when he began to self-fly chicks. This is about 25 bats per wind turbine per year. The assessment of wind turbines parking rates and trends, supposedly, that 2030 in Pennsylvania will also be installed to 3500, which means, that if no action is taken, per year only in the state of wind power plants will die of 87 500 bat.

Fear of bats, and perhaps this is good news, however, bats are very important part of nature. Bats control of insect abundance – one insectivorous bat during the night can catch on 500 two 3000 various insects. So if one wind turbine per year are killed on average 25 Bats, then for a wind power plant is not destroyed on impact 17 millions of insects, which includes both people, animals and tormenting flies, and the dissemination of malaria mosquitoes, and trees or crops pests. 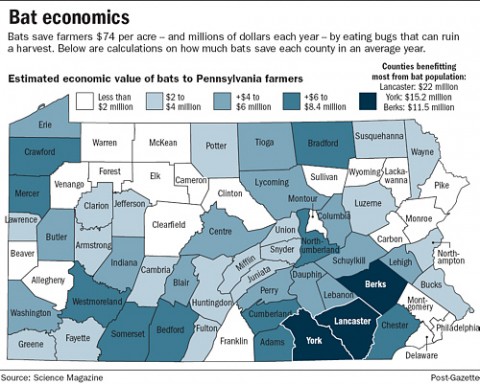 The economic benefits of bats size and distribution of the Pennsylvania

Insectivorous bats in decreasing abundance, increasing insect, between some of the crop pests. It means, farmers, to protect their crops, will be forced to buy and use greater quantities of pesticides, t.y. face higher costs for harvest grow. This is the "bat effect": of wind farms on bat killing – still inhabited part of the insect, crop pests – farmers spend more on the purchase of pesticides – increasing cost of production of vegetables – agricultural products more expensive market tomatoes.

It must be recognized, that is to create a special, on wind turbines attached devices, who runs a high-frequency sound generation principle. This sound is heard only bats and discourages them from turbines blades. It is also found, that bat fatalities can be reduced by slowing down the power and the speed of rotation of the wing. However, new technologies cherish the wind power installation cost or require significant additional investment when trying to install special devices on existing, while reducing the wind turbine rotation speed of the wings, and reduce the amount of energy produced. Therefore, finding a compromise is formed like a vicious circle – of wind farms on bats žūvant losses to farmers, and if you want to save bats by wind power using the latest technologies and reducing the speed of rotation of the blade losses to electricity producers.