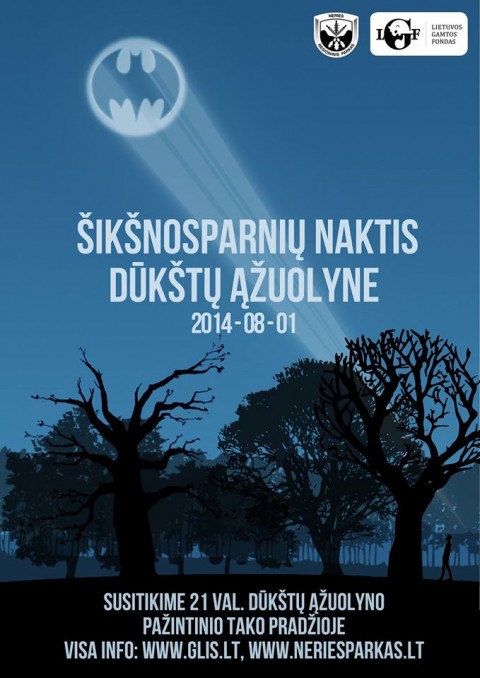 August 1 d. welcome to bat at night Dūkštų oak, where you can get acquainted with the mysterious bat lifestyle. From their hiding places when being ejected just after midnight, Bats has earned a reputation mystical creatures, and their way of life is entangled with power frightening myths. Come and make: Bats - not the hair besiveliantys bloodsuckers, cute and fluffy animals, a neighborhood very useful.

The meeting Dūkštų oak 21 val. and sometimes receive dusk - the time, when, According to legend soaring, Bats fly away hair and getting involved in drink blood. These and more to dispel myths about bats help the Lithuanian Fund for Nature conservation specialist Remigijus Karpuška. If the story did not convince, running of the loose hair will be able to make, Bats - too good navigators, unnoticed that the obstacle in its path.

You will learn, that bats living in Lithuania not only the taste of your blood encroached, but during the night destroys wealth bloodsucking insects. Lithuania living in small species of bats, such as the pipistrelle bat Nathusius' pipistrelle little or seized during the night after 3-5 thousands of mosquitoes. Imagine, as far as the bloodsucking insects every night destroys the female colony, which are often gather even 100 animals. Larger bats - brown owl or late Šikšnys - spring night can sutriaukšėti over 20 Insect pests - Maybug.

Dūkštų oak can meet half of all bat species living in Lithuania - even 7! Do not miss your chance to see Nathusius pipistrelle, pipistrelle dwarf, European plačiaausį, little evening primrose, chick Plikšnys, quick-eared brown or even Brandt pelėausį. All of these bats after night hunting gladly prisnūsta old tree hollows, with abundant oak Dūkštų. There is no shortage here of artificial roosting sites - going to see dozens of trail bats nesting set and find out, as a tiny bird houses can accommodate over a hundred female bats, and why males are even nesting boxes erdviausiame live one.

By using ultrasonic sensors will be invited to listen to the bat "songs" - emitted ultrasonic signal, which help them hunt down prey. To get out of sight of the bat succeed unless only for sophisticated high moths: some of them, felt the bat signal, dives steeply down, so deceiving hunter, others - to grow special hairs, which absorbs the ultrasonic signal emitted by the bat. Get acquainted with the other bat monitoring methods, find, as the room "mooch" lost course bat, what to do, the bats settled in attic.

Bat night August events across Europe and worldwide, in order to draw public attention to the threats to bats and their conservation.

Lithuanian Fund for Nature and the Neris Regional Park information