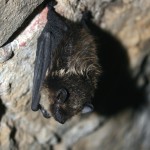 "They veliasi the hair, sharp teeth biting into his neck and sucks the blood ", - A horror movie script worthy of the stories told to month "Cultural night with bats access came from Vilnius. However, when listening to a story about the mysterious world's only flying mammals living in their opinion has changed: Myths fell desperate struggle with the knowledge, fears of being replaced by a fascination - after all, these fluffy feathered for not only dangerous, but even useful - it kills hundreds of cozy summer evenings degrading bloodsucking.

And have you heard as a singing” Bats? Do you know, that each species emits a distinctive, only the inherent noise? August dusk - the right time to lift our eyes to heaven and become familiar with the night flying. On Friday, the lawn and Verkių Pavilniai regininių parks Lithuanian Fund for Nature Specialist Remigijus Karpuška will tell you about the mysterious bat lifestyle, introduce their tracking methods and scattered about these night navigators pitching myths. Come and learn, why bats do not be afraid! Bring all your friends and, who have not grown out of the bats soaring myths and fellowship, which speaks high notes of the night sky just came across my bat.

Puffing ultrasonic waves bat-oriented environment, captures and hunt down prey. Some who know moths have developed their own methods of protection - they felt the bat signal to dive right land, so deceiving hunter. Some butterflies grew a special hair, that absorb ultrasonic signal and bat is not easy to capture the prey. However, it is - perhaps the only cases where a victim manages to escape from the bat. In all other cases they are - superior snipers. At that you can make your eyes - watching, as an evening snack bats hunt down hundreds of bloodsucking. You can see last year Verkiai park raised bats nesting-boxes and count, much night flying jumps out of the darkness of the night of every road joint.

In August, each year more than 30 European Bat Night organized. This year the international event will take place for the 17th time. In many countries, Bat Night organized last weekend in August, other, according to early for some bat species migration, – events are organized in the past.

Event in Vilnius in August and the beginning chosen because, that from August Lithuanian Fund for Nature implement the Vilnius city municipality environmental education program "Meet – Bats”. The project aims to raise public awareness of bats living in Lithuania, the protection and the improvement bat species composition of investigation and protection of Vilnius. During the project, City residents will be introduced to bats, their security practices and thus gain knowledge, how to handle a bat detection, how to safely "get rid" of the space - how to deal, that they do not undermine the. It is expected, that in this way will increase the capital of Vilnius residents and guests environmental awareness, thus reducing the illegal bat visits žiemavietėse, citizens already their duty to report unsafe places to hibernate setting out on bats.