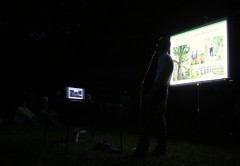 Event participants with magical animals introduced Lithuania Bat Protection Society, Lithuanian Fund for Nature conservation specialist Remigijus Karpuška. He told, Bats are unique animals, other prominent among most mammals unusual biological properties. Attendees learned, Bats are not birds or mice – This is the only self-flying mammals, that nourish their young with milk. Unlike birds, bat wings of feathers at, and a thin film of skin, which combines not only the front of the posterior limb, but the tail and very prolongation front limbs fingers. To walk or stand, they fail, because the legs and feet too weak to perform the following functions. They are used for other purposes - some species are caught with their help and parsing larger prey, and all species - overhanging. Even žiemodami, when bombarded by a few months, hanging upside down.

According to the appearance of, diet and orientation in the environment all the way bats are divided into eating the fruit Fruit and insectivorous. Fruit bats are indeed impressive size – for example., Indomalajinėje area resident Kalonge (Pteropus vampyrus) outspread wings of the distance between the tip to 1,7 metro. Insectivorous bats are generally lower than Fruit, and environment-oriented and visual, and the dissemination of ultrasound. This is another unique feature of the bat - emitting ultrasound and ears catching the returning echo. Most of them feed on insects, but there are carnivorous, feed on amphibians, reptiles or even other small bats. Among the insect-eating bats are three types of bats, of which the legend, paskleidusios unreasonable fear of bats in humans. These vampires: Simple, whitefly and apželtakojis vampires. Indeed, these three species of bats feed on blood. But the dwellers do not need to be afraid - they are not just that reported to feed on human blood, but do not live in Lithuania. Another unique characteristic of bats are insectivorous bats ability to unfavorable life 5 – 35 fold lower your body temperature and therefore slows down the metabolism not eaten even 5 – 7 cold months. This is called hibernation or hibernacija. 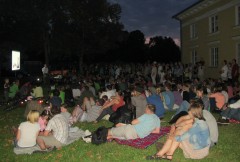 During the event, and the kids were not bored – while adults listened to lectures, children with bats met in other ways: they drew, paint, cooking their masks and other souvenirs. The evening created crafts turned out really impressive exhibition.

Towards midnight the bat was presented research tools. Great interest to the participants' aid has been stretched a special spidery network of bats catching. The thin, barely visible knit could not leave indifferent. And that will find its way into this trap are not people, and bats, It was built on a secluded lane. Waiting neprailgo, because flying bats were monitored using an ultrasonic detector and watched a film about bats.

A more intimate acquaintance with the bats helped to know and better understand these mysterious animal life - remained indifferent, bat carers ranks increased. Even well after midnight R. Karpuška was surrounded by people, who were interested in how to handle bat flew into the room, how to get rid wanting to repair the building or vice versa – attract the homesteads.

Vilnius city rich in bat species, their dwelling places. For most participants in the event was a pleasant news, the bat protection specialists always take kindly to advise interested bat protection not only during the event, but also by e-mail or by calling. And during the cold time of the year to the residents of Vilnius accommodation flew bat specialist will come, caught and deported to these mammals safe wintering grounds.