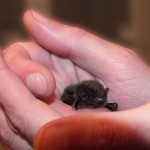 Ghana later in the evening from the other edge of the Lithuanian colleague David phoned and asked, would, if necessary, apsiimčiau job of taking care of the bat chick. A history, that Marijampolėje, apartment staircase residents found a small bat, which only loud tarškėjo, and even tried to fly. If you ask David's advice, they watered the bat and tried to spend the evening, but little after dark and just tried to nuropoti any corners and did not show even the slightest effort to fly. True, the night he was able to escape out of the box and spent the night sitting comfortably cabinet. People were ready to help the baby, bat but care is quite a complicated affair - with regard to choosing the right type of diet, regular feeding, but not to interfere too much and t.t. Be to, stressful conditions of all bats may refuse food or ingested stomach indigestion. Without knowing the type of bat, the age and condition of the phone difficult to do something specifically advise, it remained a last resort - to accept myself undertake to protect and seek, the pet of imported Marijampoles me to Vilnius. This is not the best solution, because the bats better spent there, where it was detected. Of the two evils had to choose the, the greatest chance of a successful end. 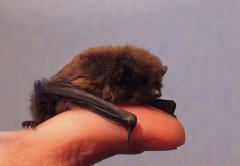 The very next day I received a guest. It is not surprising, people have found that it is thought, that this pup, who still fly and maybe even pay - people are used to seeing bats flying Lithuania biggest brown epileptics, o čia, squeezed into the corner of the box, anxiously looked around only half a thumb-sized baby. At first glance, I recognized, it is still the lowest in Lithuania young pipistrelle bat genus. But what I did not dare say this kind - too young even bat, by appearance alone would guess. However pipistrelle is a forest park and a resident - what he was doing in the apartment?

Briefly speaking to bat atvežusiais people became clearer, bat like this could end up in the staircase. The start of the summer did not produce very good weather - the heat is often changed by cold and rainy periods. That little flying insects in the air and bat really need, to find larger quantities of insects and to be filled in without depleting too much power. Outdoor lighting will always attract more insects, and thus the bats. So living in the park then pipistrelle insects flew to a nearby multi-lamp. Unfortunately for them, was left open stairwell doors and some of the staircase flew pipistrelle. Drop flew, but not all the way back found. From the road had not found me yet atkeliavusiam pipistrelle was lucky - I, that it is a panic looking for something to hit to departure, intoxicated and fell into the hands of good people. But even some of his relatives did not survive.

People under the auspices bat travel time, recovered and came to me for quite agile - viewing, or unharmed, or without breaking any bones, little more spurdėjo, tried to escape, but still did not dare to climb a flight. Within a few minutes of your lovely appearance earned co sympathy tired of pipistrelle, calmed down and began to look more tranquil corner. This sleepy and brought back to the house. 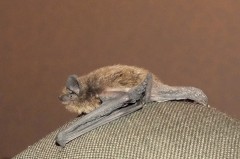 Sundown pipistrelle recovered again - curiously began to look and explore the environment by spreading ultrasounds. But it was still a good half an hour from the start of the activity, before he began to move agile, tasted the water, interested in the proposed larva in MIC. Released room pipistrelle basis wings pretty fun "ran", ropštėsi Sofas, but still did not attempt to fly. After a good hour of time, the pipistrelle was released from the box freely roam the room and the clock showed midnight, I decided to, or the pet while still, or really even pay to fly. Oral administration of a couple kirmėlaičių and already getting ready to move back in the box, that to drink and rest until the next evening. But in order to take the little one started ultrasonographic assessment of the environment and all of a sudden jumped off the floor and climbed to fly. I even took my breath away – until now I was never seen, that the land can only rise higher bats - late saddler. They spirdamiesi wings a few times and jumped straight up from the number of times they were able to rise. But my globotiems small bats had not yet been able to - to have tried to jump up and take off and the water bat, and two colors Plikšnys, but only if threatening šokčiojo. Meanwhile pipistrelle rose from the first time. I can not even claim, I saw that it pašokant - this impression, that began and rose. This is an interesting observation, because some of the literature indicates, that bats can not rise from the ground and to do that they needed at least half a meter in height. However, my wards proved, at the risk they can take off and land from. However, it must be equal to the surface, o not pieva, where they would hold the wings sumojuoti grass. 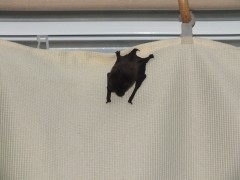 Pipistrelle resting on the curtain

Common pipistrelle flew around the room a few minutes. During that time, not once it gets to the wall or ceiling, successfully elude hanging lamp, dozen times quite successfully landed on the wall or curtain and then ascended again spun the wheels. The hair entangles himself, although sometimes near flew past few inches away. Ascertaining, bat that healthy, well-oriented environment, It has enough power and is, the night is warm and not rain, remained open the balcony door and watch, to quickly find the way to freedom. For him, it took a few minutes and disappeared in the dark pipistrelle. And left for me to wish to find a safe new home.

In conclusion, I would like to remind, that beveik Lithuania encountered all bats are included in the list of protected species (Lithuanian Red Book) and research and temporary care requires special Environmental Protection Agency is authorized. Remember, that Bats are wild animals – they were born and raised in the wild, therefore can not be taken and grown at home. How to help them advise Lithuania Bat Protection Society members David Makavičius (Phone. +370 620 30707) or Remigijus Karpuška (Phone. +370 684 63709).